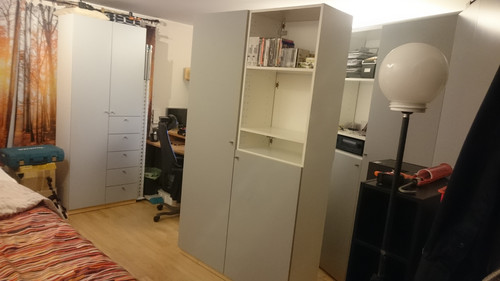 That's what my room looks like right now. Literally a metric ton of IKEA closets (some not in view) has been assembled, with some custom modifications. Most of the cleaning, building and moving stuff around is done, but there's still some work left until my former mountain of random stuff has been transformed into a comfortable and acoustically functional workplace.

Before this temporary switch from code to wood, I ported my EEL scripting engine (or rather, its API bindings) from SDL 1.2 to 2.0; another long overdue job. (It's in the wip-71 branch.) What's left to do before release is updating the included GUI toolkit. After that, I can move on to integrating it with Kobo Redux, and get on with the actual 0.8.0 branch for Steam.

However, as I've mentioned before, there will be at least one more 0.7.x release on itch.io before the Steam release, and I'll get on that when I'm done with the EEL update.